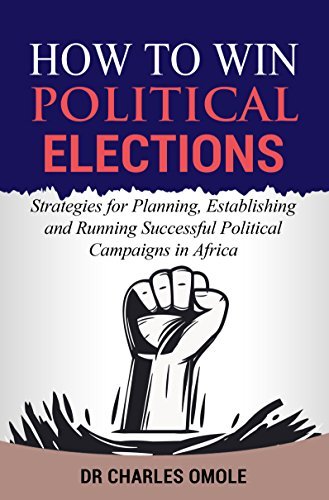 How to Win Political Elections: Strategies for Planning, Establishing and Running Successful Political Campaigns in Africa

Political campaign in Africa is increasingly taking on more sophistication and complexity compared to a few decades ago. With the widespread use of mobile technology and a predominance of a youthful population; the primordial campaign strategies need to be adapted to reflect the strategic planning and demographic nuances of modern life in Africa. Though specific esoteric circumstances still exist in many parts of the continent, there are however many general principles that can be followed in the planning, establishing and managing a successful political campaign in Africa.

With the increasing use of social media by its mainly youthful population, high level of illiteracy in rural communities, introduction of technology-aided voting systems, widespread economic deprivation, pervasive corruption at all levels, frustration with governments at of types, Africa is witnesses a perfect storm of political meltdown that makes election outcomes prone to ever cryptic manipulations and more unpredictable for lots of political candidates. But success is never an accident, it is a methodology. In this book, the essential elements of successful political campaigns will be revealed, from the decision of a candidate to run for an office, to putting together the campaign infrastructure to running the campaign to a successful completion. This book is written as a project manual rather than as a textbook; so, it is a step by step guide to planning and implementing a political campaign from beginning to the end.

John Podhoretz once said, “Every great political campaign rewrites the rules; devising a new way to win is what gives campaigns a comparative advantage against their foes.” This book will help every political campaign to construct that new way of winning.

There are no reviews yet.

Be the first to review “How to Win Political Elections: Strategies for Planning, Establishing and Running Successful Political Campaigns in Africa” Cancel reply